Eight year old Ryan came into my practice last spring with his mother. She began his story by telling me it seemed like Ryan consistently had a runny or stuffy nose. Sure enough Ryan had quite the mucus-y congestion going on and angry red irritation around his nose as a telltale sign that this was not a one-off experience. His mom went on to tell me that when he was young she believed he would just outgrow it, but that was not the case. It drove her crazy she said because he was always sniffling and congested. Once Ryan was in school it seemed like every 6 weeks the congestion would be accompanied by a sore throat or barking cough that would keep him home.

Ryan’s mom said of course he had been given more antibiotics than she would have liked, but she didn’t know there was really another option. However, it seemed to her as if he would just clear up from one round of antibiotics and within ten days the sinus congestions was right back where he started. I asked Ryan’s mom about his health during early childhood and she shared he had also had his share of ear infections which she believed was just part of the territory.

Hearing Ryan’s mother tell their story, I understood her frustration. Real options to successfully break the cycle of chronic ENT’s are not readily available or necessarily discussed in the pediatrician’s office. That is because the problem is seen as being located in the sinus area, not where it really exists. Like all mothers though she just wanted her son to feel better and not be missing so much school.

I was not at all surprised that Ryan had repetitive ear infections as a baby and toddler, or that he seemed to have his symptoms return in such a short time after antibiotics. The ear infections are actually a sign in babies of overworked kidneys. When the kidneys are compromised, it then puts further pressure on the digestive system to take on some of the work. In a young child / baby with an immuture digestive system, we find often the acidic lymph fluid backs up in the ears. When the lymphatic system slows down or becomes stagnant the sinuses often become congested. In regards to Ryan’s sinus congestion, I would refer you back to my article on Seasonal Allergies. The body will use the sinus cavity as an emergency elimination route when the bowels and kidneys are compromised in any way. Basically, what is consumed during the day that isn’t either digested or eliminated will show up as a stuffy nose in the morning. Adding antibiotics that destroy gut flora to the mix only makes matters worse.

My job was twofold. First, to look for ways to make the job easier on Ryan’s bowels through dietary changes and second, to support his kidneys and bowels so they could properly drain the mucus that was going up instead of down and out. 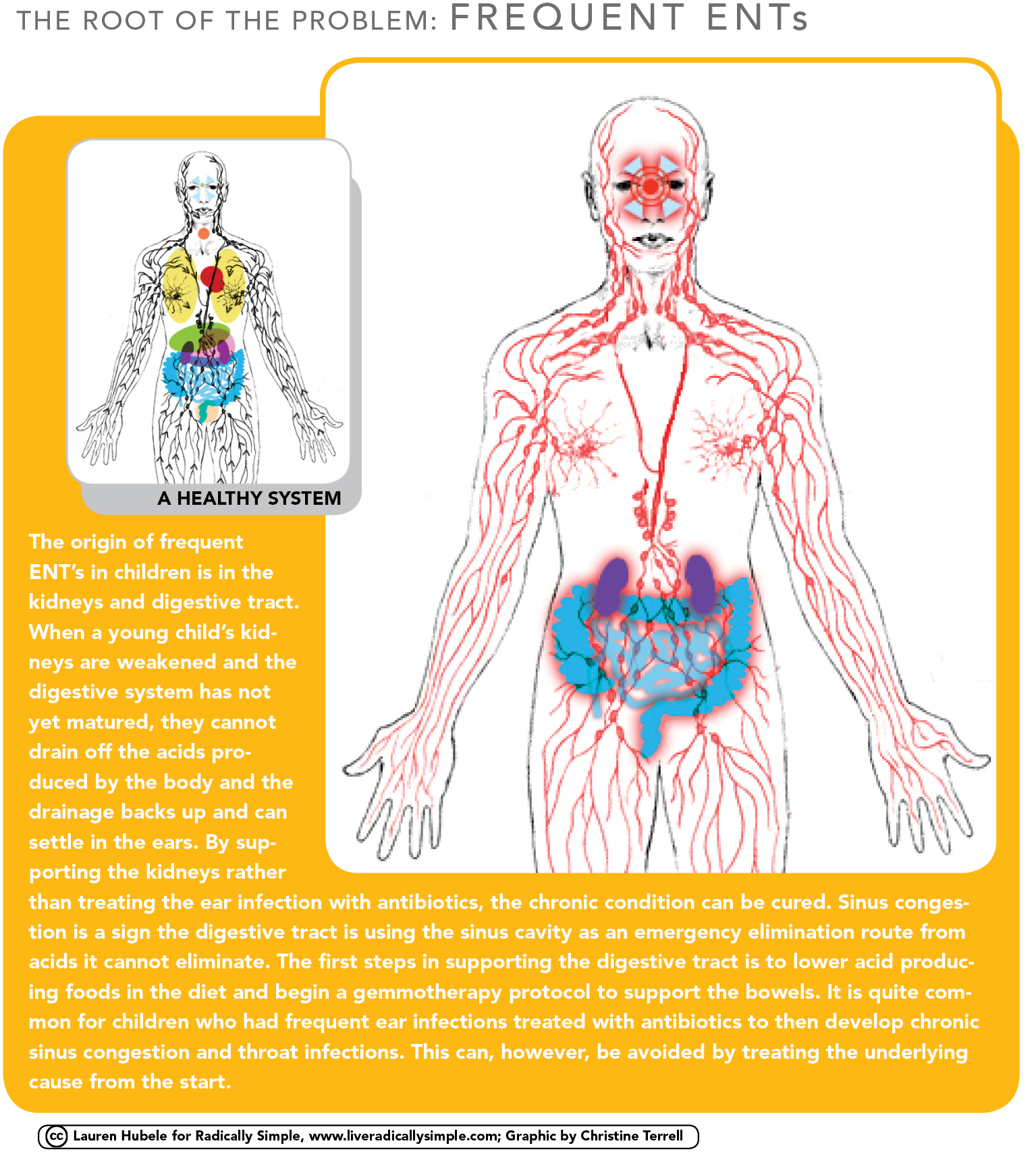 Ryan was in an acute stage of a chronic condition of congested sinuses. When this is the case, the treatment can take a bit longer to act. We needed a protocol that would reduce the acute stuffiness and simultaneously shift a long-term pattern of unhealthy elimination. While Ryan’s mom was not quite onboard to make any dietary changes, she was happy to begin the gemmotherapy protocols I suggested.

Ryan began taking a combination of three gemmos each morning that would support lymphatic drainage in his sinus cavity, decrease the inflammation and shrink mucus membranes. This same protocol also would boost his immune system and protect him from the secondary infections he was previously getting. In the evening he would take one gemmo after dinner that would support the healthy function of both bowels and kidneys.

When we began the gemmotherapy treatment, I honestly did not expect it to make any difference. In the beginning we did notice that Ryan didn’t seem to be getting the sore throats any longer, but he did stay congested. Eventually his runny nose seemed to improve for periods of time, but you could still hear he was stuffed up. We continued on the gemmo protocol and actually did not need antibiotics the rest of that school year. Over the summer we went ahead and eliminated dairy products as a family just to see what would happen. While Ryan’s nose did clear up I figured it was just because of the time of year, but here we are months into the school year and his stuffy nose has not returned. Of course it was a challenge at first to make the changes in our diet, but now we are rewarded with Ryan’s improved health and it is now just what we do.

Next week I'll be diving in to how to boost your immune system during these cold, flu and allergy-prone winter months.